It is undeniable that when running a business, the business owners always aim for highest profits. Organization restructuring is a common measure to extract the most efficiency out of a company’s human resources, according to economic principles. Moreover, an operational adjustment may be required to suit the competitive business circumstances to maintain the business and most importantly to maximise profits.

In order to maintain competitive, sometimes it means that employers have to restructure their organizations by laying off employees to decrease costs and production expenses, and on the other hand to increase work efficiency. Sometimes, the corporation even needs to carve out the business units that do not generate profit for its group, which leads to ceasing of such unit and major termination of employments.

Even though the restructuring and cease of business is reasonable and common in economic sense, such actions could bring about legal complications and massive legal disputes if not handled properly.

1. Section 49 of the Establishment of the Labour Court and Labour Procedure Act

2. Section 583 of the Civil and Commercial Code

“If the employee deliberately disobeys or habitually neglects the lawful commands …, absents himself from service, is guilty of severe misconduct, or … incompatible with … faithful discharge of his duty, he may be dismissed by the employer without notice or compensation.”

3. Section 17 of the Labour Protection Act

The advance notice under this section shall not apply to the termination of employment under Section 119 of this act and section 583 of the civil and commercial code.”

4. Section 118 of the Labour Protection Act

An employer shall pay severance pay to an employee who is terminated as follows: 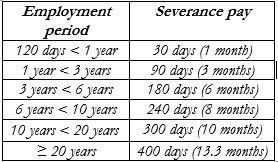 “An employer may not pay severance pay to an employee when employment is terminated upon any of the following conditions:

(1) Performing his/her duty dishonestly or intentionally committing a criminal offence against the employer;

(2) Deliberately causing damage to the employer;

(4) Violating work rule, regulation or order of the employer …;

(6) Being sentenced to imprisonment by a final court judgment …”

Besides the payment under the Labour Protection Act (“LPA”), such as severance pay and payment in lieu of advance notice (which will be discussed in Section VII-VIII of this document), termination of employment may entitle the employee to claim for damages or reinstatement under Section 49 of the Establishment of the Labour Court and Labour Procedure Act (“ELC”) for the dismissal that the court determined as unfair.

The law does not specifically define the term “unfair dismissal”. However, it grants a broad discretion power to the court to determine the fairness of the dismissal. The court will look at the specific facts of the case to determine the fairness on a case-by-case basis, such as business necessities, severity of employee’s misconduct or whether there is the same treatment applied to other employees.

In the case of unfair dismissal, the court may

order the employer to reinstate the employee at the same rate of wage as of the time of dismissal. However, if the court finds that the employer and the employee can no longer work together, it shall order an amount of compensation to be paid to the employee, so-called “unfair dismissal damages”.

There are several Supreme Court decisions on labour cases determining the fairness of the employment termination due to financial loss, restructuring, and cease of business. Please find below the examples of such decisions.

SCD 4753-4760/2546: The employer’s business was extremely unprofitable and thus the employer had to lay off its employees. Moreover, in considering dismissal, the employer had followed all required rules. The dismissal was with justifiable reason. Thus, it was not an unfair dismissal.

SCD 1508/2557: The employer’s company had faced unprofitable situation, so it dismissed the employee. The loss of the company was up to THB 5 million, almost THB 1 million (20%) over its registered capital. The restructuring was to reduce the loss of the company, it was considered a necessary action to maintain the business. Thus, it was a fair dismissal.

SCD 1850/2557: There was no proof that the employer’s company had incurred any significant financial loss that would justify cost cutting by laying off employees to maintain the business. The dismissal was without justifiable reason. Thus, it was an unfair dismissal.

SCD 10265-10274/2558: The Court ruled that the dismissal because the company has lower profit (but still profitable) was considered an unfair dismissal.

It can be seen from the aforementioned decisions that when claiming for financial loss, such loss must be actual and significantly affect the continuity of the employer’s business. The employer must also be able to attest such financial loss to the court. The court often considers the information from the financial statement and the profit & loss account of the company.

SCD 2124/2555: The employer restructured the entire company by minimizing the organization, so that the employees worked more efficiently and were easier to control. The restructuring was due to high competition in the business and was done in general (not to target any specific employee). After restructuring, the employee’s position was cancelled and there was no replacement. The dismissal was fair.

SCD 1808/2557: Even though the employer’s business had been unprofitable, after the restructuring the business started to gain some profits. It can be seen that the business was on the rise. Dismissing the employee would not make any significant difference in reducing expenses. The dismissal was unfair.

SCD 6099/2556: The dismissal was due to business restructuring and redundancy, but there was no proof that the business of the employer had ever experienced any economic problems or necessities. It was considered as an unfair dismissal.

Restructuring which results in laying off employees, even though it is a commonly used measure in business, will be considered fair only when there is a justifiable reason, e.g. if it is the last option to maintain the business or such measure is done without discrimination against any particular employees.

SCD 6158-6220/2548: The dismissal resulted from the expiry of the factory lease agreement between the employer and the Department of Industrial Works, causing the employer’s business license to expire. The employer could no longer conduct the business and had to return the factory. The dismissal was with a justifiable reason, it was not an unfair dismissal.

There are several measures that can be taken by the employers to reduce the wage expenses while avoiding employment termination. Some examples of such measures are as follows:

The employer has a duty to pay severance pay to an employee whose employment is terminated by the employer and who has worked for at least 120 days. There are only few exceptions from this duty, for example, the end of the fixed-term agreement (only for few limited cases, e.g. seasonal work or project work less than 2 years) or the employee’s severe misconduct under Section 119 of the LPA.

We would like to note that the dismissal due to financial loss, restructuring, and cease of business is not due to the default or misconduct of the employee under Section 119 of the LPA. Therefore, severance pay must be paid to the employee.

Under Section 17 of the LPA, for a non-fixed-term employment (unlimited-term), if the employer wishes to terminate the contract, a written advance notice must be given to the employee. On the other hand, the employment can be terminated immediately, but it is subject to the payment in lieu of advance notice.

The exceptions for the advance notice requirement are specified under Section 17 para. 4 of the LPA or Section 583 of the Civil and Commercial Code, applying to cases of severe misconduct of the employee. In such case, the employer can terminate an employee with immediate effect, without making payment in lieu of advance notice or compensation.

However, dismissal due toeHowdis= financial loss, restructuring, and cease of business does fall into the exceptions as mentioned above. Therefore, the employer cannot immediately dismiss the employee, unless the employer grants payment in lieu of advance notice to the employee, if elect to do so.

The dismissal due to financial loss, restructuring, and cease of business may be common in the eye of the business operator, but it can sometimes be very complicated with regard to labour law. The employers may end up with several risky legal cases if this process is not handled properly, as these kinds of dismissal generally affect a lot of employees (if not all employees of the company, in case of cease of operation).

The severance pay, payment in lieu of advance notice, together with other payments under the LPA (e.g. compensation for unused vacation, overtime, wage, etc.) must be paid to the employees at all time in the event of such dismissal.

There is also the question regarding the unfair dismissal damages that may create uncertainty to the situation, as the court considers the fairness and the damages on a case-by-case basis. Therefore, other measures to minimise the loss are recommended to be taken by the company.

All in all, if the company is at the point that it needs to make the decision toward restructuring or cease of business which results in massive (if not all) termination of employment, the more recommendable way for this situation is to enter into a settlement agreement and ask for a resignation letter from the employees to avoid any further legal complication.