Taxation of foreign-sourced salaries of expats living in China

Taxation of foreign-sourced salaries of expats living in China

A question regularly raised by expats liv­ing in China refers to the taxation and declaration obligations of their foreign-sourced salary income in China.

The relevant foreign-sourced salaries are typically paid and borne by a foreign (group) com­pany. This is typically a situation where the expat has two or more functions and employment contracts, of­ten one with a local Chinese entity and one with a re­gional entity (Hong Kong) or the foreign mother company.

This normally arises in situations where one employee has several employment contracts within the same company group, which is quite common for leading posi­tions such as director, general manager, etc. For instance, the director of the lo­cal Chinese subsidiary has a contract with this Chinese entity but has also an employment contract with the German mother company or a Hong Kong com­pany for business development in Asia.

A differentiation needs to be made be­tween the obligation to declare income and the actual taxation.

Generally, two different tax returns have to be made. A monthly tax return being the basis for the monthly Individual In­come Tax (IIT) payment. Furthermore, an annual return has to be filed by 31 March of the following year.

Expatriates who do not reside in China (non-residents) and who live in China for less than 90 days (or less than 183 days if a double taxation agreement is applicable, which is almost always the case) are taxed only on their time apportionment in China, i.e. only on the income they receive for their work in China from a Chinese employer. Income tax is payable (only) on income relating to actual working time in China or paid by companies resident in China.

According to Cai Shui [2019] No. 35 of 14 March 2019, the calculation of the monthly income tax is based on the income from both inside and outside China and apportioned to the days for which the employee actually worked in China. 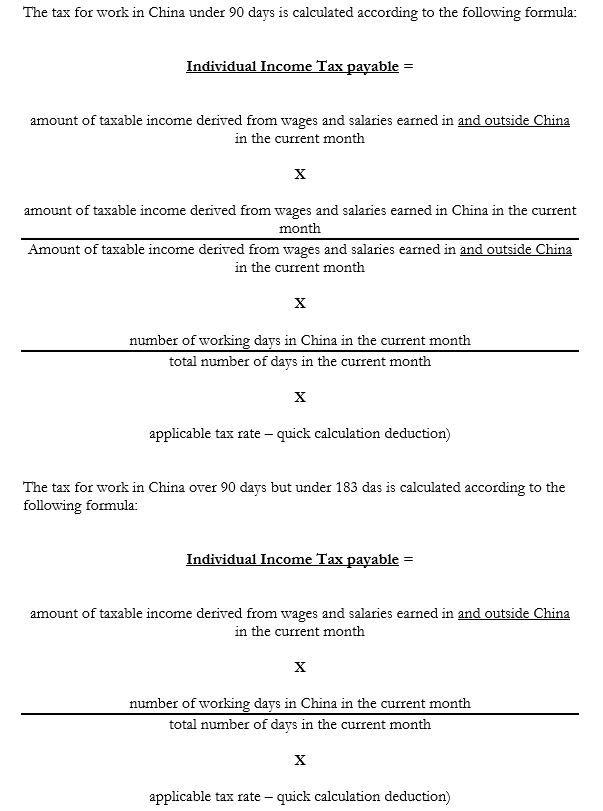 The formula is applicable for all non-tax residents, including senior management.

So generally, foreign income has to be in­cluded in the calculation for the de­termination of the taxable income and the IIT and is thus part of the IIT decla­ra­tion with regards to the time apportionment, despite that no tax has to be paid on the foreign income.

According to Art. 10 IIT Law, an annual tax return must be submitted if:

a) after deduction of all costs, a person receives an annual income (comprehensive income within the meaning of Art. 2 IIT) of more than 60,000 RMB (approx. 8,000 EUR), or

b) a person receives a salary from more than two employers and, after deduction of all costs, that salary exceeds RMB 60 000

g) a person gives up his Chinese residence due to emigration (which, however, only applies to Chinese citizens who have registered a household in China)

h) a person receives salaries from more than two institutions in China, although there is no unlimited tax liability in China

i) there are other circumstances established by China’s State Council

The submission of the tax return for the annual income (comprehensive income within the meaning of Art. 2 IIT) must take place between 31 March and 30 June of the following year.

It should be noted that non-residents do not have to file an annual tax return if the withholding tax payer pays the tax monthly and the person concerned receives salaries from no more than two institutions.

IV.    Declaration of non-China sourced Income according to the “Provisional Measures on the Personal Lodging of Individual Income Tax”

Also, non-China sourced income has to be declared in China for cases where tax has already been paid in another coun­try. The taxpayer has to file a tax return with his tax office in charge within 30 days after the end of the for­eign tax year. This applies in cases where the tax becomes due upon the end of the for­eign tax year. If the tax is due in the foreign country at the time of receiv­ing the income, then the tax filing is due on 30 January of the year following the re­ceipt of the income. This also applies in case the income is tax exempt in the foreign country.

Non-China sourced income has to be con­sidered in various circumstances in Chinese tax declarations. This is sim­i­lar to international standards. Such information is increasingly being used in information exchange with tax au­thori­ties in other countries. It is therefore highly important to prepare such tax declarations in accordance with all regulations and compliance require­ments.

We hope the information provided herein was helpful for you and your business.
If you have any further questions, please do not hesitate to contact us at 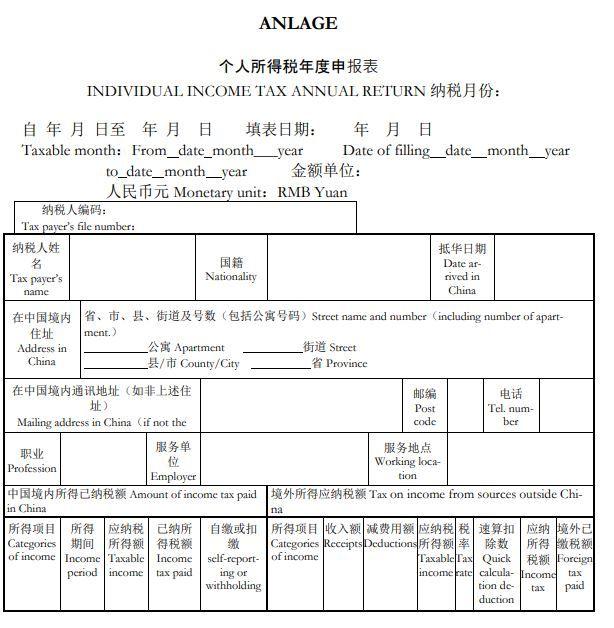