Liquidation of a Thai Company (6 pages)

Liquidation of a Thai Company (6 pages)

I. Reasons for the Dissolution of a Company

According to Sec. 1236 CCC a company is dissolved:

According to Sec. 1237 CCC a limited company may also be dissolved by the court on the following grounds:

Sec. 1247-1273 CCC are the applicable provisions in the event of liquidation of a private limited company in Thailand.

In case the company shall be dissolved by a special resolution, this resolution has to be passed by a majority of not less than three-fourth of votes present (Sec. 1194 CCC). The process will be as fol­lows:

The company must return the company’s taxpayer card to the Revenue Department within 60 days from the date at which the Ministry of Commerce accepts the registration of the dissolution (the “dissolution date”, see II, 3.). In addition, if the company is registered for VAT, it must also give notice of the cessation of its business and return the VAT registration certificate to the Revenue Depart­ment within 15 days from the dissolution date (sec. 85/15 Revenue Code).

The corporate income tax return for the period ending on the dissolution date must be filed within 150 days with the Revenue Department together with the adopted and audited financial state­ments for the period.

Under the Revenue Code, the Revenue Department has the power to investigate tax re­turns for a period of two years. It can extend the investigation to a period of up to five years in case there is any evidence or suspicion of tax evasion. The scope of examination will depend on the facts and how well the company has complied with the tax regulations in the past.

In case the company had controversies with the tax authorities during the last years, it should consider leaving the company dormant for a period of at least two years before enter­ing into the dissolution process, so that the tax prescription period of two years ex­pires. Even though the company is dormant, it still has the duty to file corporate income tax returns, have the accounts audited annually, and submit the audited financial state­ments to the Ministry of Commerce.

In case the entire business and assets are not transferred, the VAT on outstanding assets is due on the dissolution date even if the assets have not yet been sold or trans­ferred.

The dissolution has to be considered as a termination of employment for which the employ­ees must be compensated according to Sec. 118 of the Labour Protection Act. The amount of severance payment is dependent upon the time the employee has been working for the company. The rates are as follows: 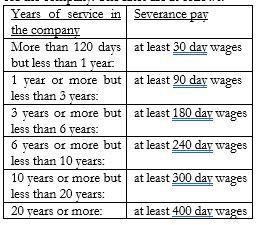 The period of employment includes holidays, leave days and days on which the em­ployer has been given order to stop working. The payment is calculated at the average wage rate during the last 30 days before termination. In addition to this, the employer must pay remuneration in lieu of the unused annual leave to which the employee is enti­tled.

The company must withhold personal income tax for its employees. The severance pay­ment and remuneration for unused annual leave must be included in the computation of the personal income withholding tax.

V. Liquidation and Liability of Directors