“Cross-Shareholding” and Taxation of Dividends in Thailand

“Cross-Shareholding” and Taxation of Dividends in Thailand

“Cross-shareholding” is a form of a business relationship that enables the shareholding between two or more companies in a way, that each company involved owns shares in the other company.

Depending on the shares’ volume, there are differences in the taxation of the dividends, Thai mainly based on Section 65 bis (10) of the Revenue Code (“RC”). The tax impacts will be explained in the following chapters.

5% of the net profit up to 10% of the registered capital must be reserved and booked as capital reserve. The remaining profit when distributed as dividend, is generally subject to a withholding tax of 10%.

1. IF holding less than 25% of the shares of the related company

The company receiving the dividend only has to include 50% of the received dividend as income in its annual tax filing. If the receiving company generates a profit, the 10% withholding tax (withheld by the paying company and submitted to the Revenue Department) can be credited by the receiving company against its payable corporate income tax (so-called “tax credit”). If the company does not generate any profit in the years, it receives dividend for the related company, the withholding tax already paid can be reclaimed in principle, but the process is (very!) complex in practice.

2. If holding equal to or more than 25% of the shares of the related company

An exemption applies in the following case:

“The following limited companies organized under Thai law are not required to include any part of such dividends or share of profits as revenue:

the following conditions have to be met:

The following sample illustrates the differences in the taxation of the dividends received by Company A and Company B. 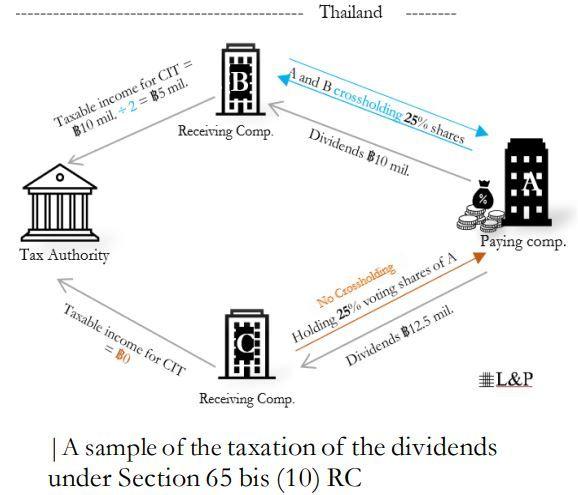 Cross-Shareholding status – When does it matter?

The Revenue Department usually applies the fiscal year to disqualify the exemption dividend rule if the “cross-shareholding” happens in the same fiscal year as the dividend distribution.

If any of the above conditions are not met, the basic case (first sentence of Section 65 bis (10) RC) applies, i.e., the receiving company has to include half of the dividends as income in its annual tax filing.

If both “cross-shareholding” companies have to pay taxes on the received dividend from the other related company s, it will go in circles:

Usually, the tax exemption rule only applies to dividends received from a company set up under Thai law. The benefit from this rule is not given if the paying company is set up under foreign laws, even if it is carrying on business in Thailand, e.g., via a branch office.

The Revenue Department issued Royal Decree No. 442 in order to provide an exemption on corporate income tax for source dividend to a Thai company that receives dividend income from the foreign company under the following conditions:

Moreover, the Revenue Department issued the following further conditions regarding tax payments for and on dividends that could be exempted from corporate income tax:

(3) A dividend must derive from net profits taxable in the country of the dividend payer, and such tax rate must be not less than 15% of net profit. (already in compliance with the new OECD minimum tax requirements.)

(4) Important: Regardless of whether the country of the dividend payer has any legislation to reduce or exempt the net profit.

The rationale according to Royal Decree No. 442 is to encourage Thai businesses to invest in foreign countries.

The rationale behind the 15% tax rate threshold is that the Revenue Department does not want to encourage Thai investors to invest in tax havens or low-tax countries and to be compliant with OECD regulations. However, even in Thailand: many businesses with BOI incentives do not have to pay any profit tax or withholding tax when paying out dividend, resulting from the BOI promoted business for up to 8 Years. It remains to be seen whether this will be compliant
with the OECD’s minimum tax requirements.

However, if “cross-shareholding” is given, the abovementioned tax impacts must be taken into consideration.