Establishment of a Regional Operating Headquarters in Thailand

Establishment of a Regional Operating Headquarters in Thailand

The Regional Operating Headquarters (“ROH”) was originally introduced by the Thai Govern­ment on 16 August 2002 (herein­after referred to as “original scheme”). After a long time of no improve­ments within the law of taxation on ROH, on 5 Novem­ber 2010 new leg­isla­tion was ap­proved by the Crown and was pub­lished in Royal De­cree Volume 127 Section 67 Gor on 5 Novem­ber 2010 and published in the Royal Gazette on 8 Novem­ber 2010 (hereinaf­ter referred to as “new scheme”).

The new scheme was intended to boost investments temporarily and was only available until 14 November 2015. The original scheme still remains in force.

An ROH can either be an independent company incorporated under Thai law or an organiza­tional unit of such a company. The busi­ness of an ROH is limited to the pro­vi­sion of services to their respective associated enter­prises or branches in Thailand or abroad.

III. Services provided by ROH to its associated enterprises or branches that qualify for tax privi­leges

Services that an ROH provides to its associated enterprises or branches that qualify for tax privileges are managerial and administrative services, technical services, and supporting ser­vices. Supporting services include:

As to the definition of associated enter­prises, the Revenue Department has two crite­ria in determining whether or not a com­pany can be considered as an ROH’s associ­ated enterprise:

IV. Regional Operating Headquar­ters under the legislation of 2002 (“Original Scheme”)

An already operating Thai company which is willing to obtain the ROH status and the advantages from it can apply for acknowl­edgement as ROH at the Large Taxpayer Of­fice (“LTO”), the responsible tax author­ity. If the company meets certain require­ments, the LTO will grant tax advan­tages automatically from the next tax pe­riod on­wards.

If a Thai company wants to qualify as ROH, it has to apply for the acknowledge­ment as ROH together with the application for a tax number (Tax Identification Num­ber = TIN) and the registration for Value Added Tax (“VAT”) at the Revenue Depart­ment.

In order for an ROH to be eligible for tax bene­fits under the original scheme, it must fulfil the following con­ditions:

ROH companies incorporated in Thai­land under the original scheme enjoy the follow­ing privileges:

Expatriates may choose to be taxed at the rate of 15 percent. By doing so, the income received must not be calculated together with other income. This privilege is available only to expatriates em­ployed by the ROH and is limited to four consecutive years of employ­ment in Thailand, regardless of how exten­sively the beneficiaries have to travel abroad during the em­ployment period. To be enti­tled for the benefits once again, expatri­ates have to discontinue em­ployment with any ROH com­pany in Thailand for more than 365 days.

V. Regional Operating Headquar­ters under the legislation of 2010 (“New Scheme”)

When calculating Corporate Income Tax, the ROH company has to separate non-quali­fied income from qualified income and its related expenses. If the expenses cannot be separated, the ROH company must appor­tion non-qualified and qualified ex­penses by the ratio of the received income. However, if such method of apportion does not reflect the reality of business, the ROH company may request approval of the Direc­tor-General of the Revenue Department to use other, more accurate and realistic ways of calculation.

Foreign companies that wish to be granted non-tax privileges given under the Investment Promotion Act in addi­tion to the abovementioned tax privileges must apply for investment promotion privi­leges from the Board of Investment (BOI) BE­FORE notifying the Revenue Department of their intention to register as ROH in order to be able to hold the majority of the shares in the ROH company. The BOI promotion provides additional tax and non-tax benefits such as[1]:

From our experience, particularly the require­ment of five expats with THB 2.5 million salary or above is difficult to meet.

Com­pared to Singapore or Hong Kong, the legislation is still far more complicated with­out offering substantial additional benefits. Nevertheless, considering applying for an ROH does make sense if the main activities of the Company are in Thailand anyway and the regional function of the Thai organisa­tion is to be increased.

Annex I:  ROH – Overview of Benefits and Requirements under the Original Scheme 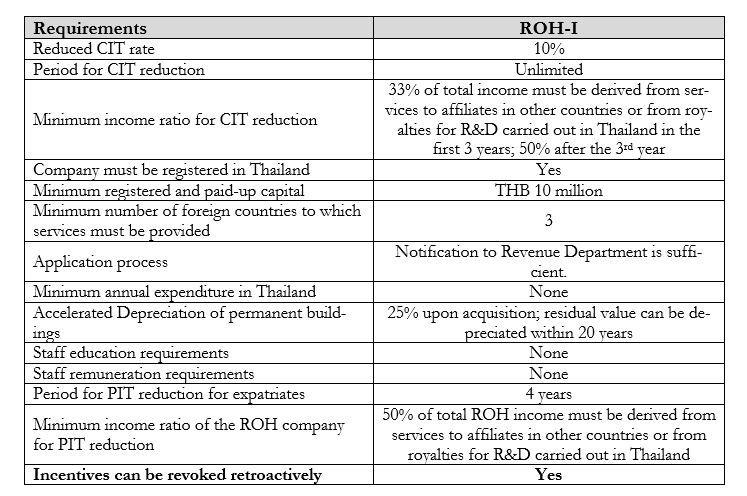