Resignation of a Director of a Thai Company

Resignation of a Director of a Thai Company

According to Sec. 1144 of the Civil and Commercial Code (CCC), the business of a Thai company is run by one or more directors (the board of directors). The board of directors as representative organ of the company is liable towards the company’s shareholders and third parties (e.g. contract parties or employees). However, similar to most jurisdictions, creditors can generally only seize the company’s assets (Sec. 1096 CCC), but the liability for debts of company may be extended to the directors under Thai corporate law. The board of directors as well as the individual director may become debtors. Accordingly, it is in the interest of any director of a Thai limited company to be able to resign from the director position in order to not be taken liable for debts of the company.

On the other hand, the company and its share- holders are also interested in being able to re- move a director to avoid him abusing his director position as he could still bind the company even after termination of his employment.

To formally remove a director from his position, a registration with the Ministry of Commerce is required. If no director is appointed as replacement, a resignation letter of the resigning director or a resolution of a shareholders’ meeting has to be presented.

The requirement of the resigning director’s signature may lead to problems if he refuses to sign the resignation letter in order to re- main his status as director. In this case, an abuse of the director position is imminent, and a shareholders’ resolution to remove the director should be obtained.

III. Registration with the Ministry of Commerce

The termination of the director status be- comes effective with signing the resignation letter; the registration with the Ministry of Commerce is only declarative in nature. However, the termination cannot be asserted against third parties until it has been duly registered with the Ministry of Commerce. As a consequence, even if the director al- ready signed a resignation letter, he can still bind the company, although he is internally no longer authorized to do so. In such a case, the company can hold the director liable internally, but cannot disengage from its external obligations.

The company can now use this pre-signed resignation letter at any time to terminate his director status, without depending on the di- rector’s cooperation.

To avoid an abuse as described above and to ensure that the company can remove the di- rector from his position at any time without the requirement to obtain a shareholders’ resolution (for which certain notice periods have to be complied with), it is recommended for both parties to pre-sign a resignation letter (see sample annexed hereto). The di- rector delivers the signed resignation to the company, leaving the effective date blank. 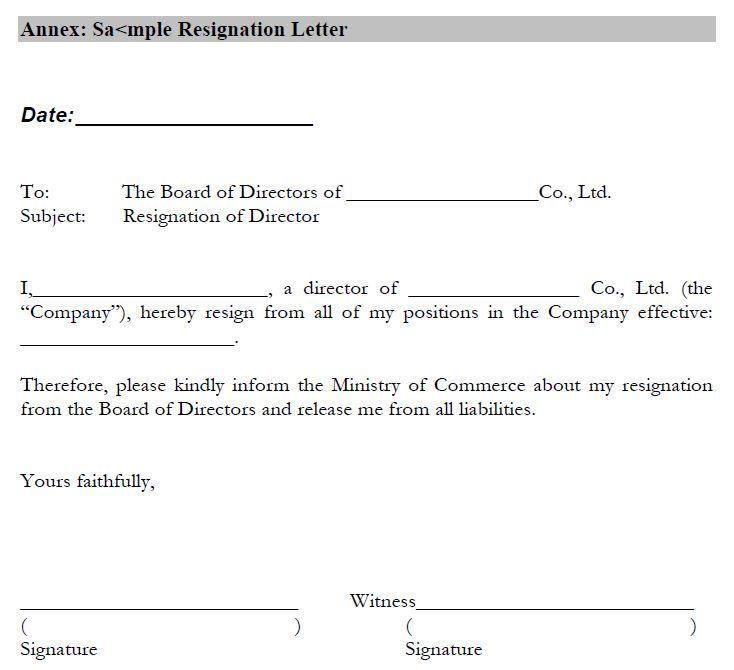