In Hong Kong, personal income tax is known as “Salaries Tax” and is governed by the Inland Revenue Ordi­nance (IRO). Sala­ries Tax is only lev­ied on the annual in­come of an individ­ual deriving from their em­ploy­ment.

Income not generated through employ­ment, such as accrued divi­dends or prof­its realised through the sale of shares, is not subject to taxation in Hong Kong.

Salaries Tax only applies to income arising from or generated through employment in Hong Kong. This is known as the Territorial­ity Principle.

(1) Salaries tax shall, subject to the provi­sions of this Ordinance, be charged for each year of assess­ment on every per­son in respect of his in­come arising in or derived from Hong Kong from the follow­ing sources-

(a) any office or employment of profit; and

(MPF). Achieve­ments from pension funds which are not estab­lished under the juris­diction of Hong Kong as well as severance payments and long service payments on termination of employ­ment are also excluded.

There are two different methods of com­put­ing Salaries Tax. It is the taxpayer’s right to opt for the alternative which leads to a lower tax burden:

The progressive rates for the assess­ment years 2016/17 are as follows:

When determining whether Hong Kong is the “source” of a person’s employment for Sala­ries Tax purposes, the IRD takes the following three factors into consideration:

If all three conditions are ful­filled, the IRD will assume Hong Kong is the source of employment, thus subjecting all income arising out of such em­ployment to taxation in Hong Kong.

The Hong Kong tax authorities will exam­ine each individ­ual case carefully. In case a taxpayer ob­jects to the assessed tax, it is likely that the IRD will demand substantial documenta­tion supporting the view of the taxpayer.

The IRD will normally determine a Hong Kong employ­ment if the employer is a Hong Kong resident, even though the con­tract of em­ployment might have been negoti­ated and signed in another country.

The Board of Review, as the independent appellate body of the IRD, issued the follow­ing opinion in the case of an em­ployee from the USA, employed by a Hong Kong company, whose employment contract was negotiated, signed and finalised in the USA:

(1A)  For the purposes of this Part, in­come arising in or derived from Hong Kong from any employ­ment:

(ii) renders outside Hong Kong all the ser­vices in connection with his employment; and

(i)   by the laws of the territory where the ser­vices are ren­dered, the income is charge­able to tax of substantially the same na­ture as salaries tax un­der this Ordinance; and

(ii) the Commissioner is satis­fied that that person has, by de­duction or otherwise, paid tax of that na­ture in that territory in re­spect of the income.

Consequently, remuneration paid in Hong Kong deriving from services rendered out­side Hong Kong is ex­empted from Sala­ries Tax, how­ever, only if the salary has actually been taxed in a foreign juris­diction.

Hong Kong’s general tax rate is one of the lowest in the world. There­fore, tax de­duc­tions are only available to a limited extent. There are three types of tax deductions avail­able in total:

Housing Benefits are not deductible from tax, which is a factor that has to be considered when calculating an individual’s tax­able in­come.

Further, if the employer pays the rent for an apartment in Hong Kong and provides it to his employee rent-free during the term of their employment, the rental value will be included in the employee’s taxable income:

According to Section 9(1)(b)(c) IRO, the rental value is part of the employee’s taxable income:

(1) Income from any office or employ­ment includes-

(b) the rental value of any place of resi­dence provided rent-free by the employer or an associated cor­pora­tion;

(c)   where a place of residence is pro­vided by an employer or an asso­ciated corporation at a rent less than the rental value, the ex­cess of the rental value over such rent; […]

In cases where the residence is provided 100% rent-free, the rental value to be added to the taxable income will depend on the type of accommodation provided.

If the residence provided is shared by more than one em­ployee, the surplus rates for a hotel, hostel or boarding house apply. 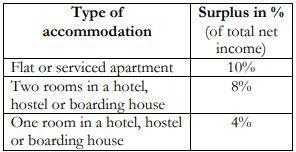 In cases where the employer provides resi­dence to the employee for rent less than the normal rent, the difference between the nor­mal rent and the rent actually paid by the employee is added to the employee’s taxable income (Section 9 (1)(c) IRO).