How to Enforce Court Orders and Arbitration Awards

How to Enforce Court Orders and Arbitration Awards

After obtaining a court order or an arbitral award it may occur that the defen­dant does not comply with the judgments or awards. While the law in prin­ciple does not allow private parties to enforce an order or an award by themselves, the enforcement has to be done by the power of the governing law or statute.

This Newsletter is made to describe how the execution takes place under the Thai law in respect of civil cases and international commercial disputes, either those resulting from lawsuit or arbitration.

I. Execution of Court Orders/Judgments

By the virtue of the Civil Procedure Code (CPC), the execution proce­dures can only begin in the following cases:

Under the CPC, execution procedures are conducted through the following steps:

In the event that the defendant does not acknowledge the decree of the Court, the plaintiff’s lawyer has to ask the Court to issue a de­cree by making a statement to the Court saying that the case has been decided but the defendant has not yet acknowl­edged the Court’s decree. In practice, the Court will issue a decree and send it to a Warrant Delivering Officer. Then, the lawyer has to follow up with such officer re­garding when a decree would be issued and request the officer to deliver the issued decree.  If the lawyer does not do so within 15 days after the decree is issued by the Court, the officer will re­turn the de­cree to the Court. Furthermore, the lawyer also has to check the date the de­fendant receives a decree in order to determine the default period. Nor­mally, the Court will demand the defendant to perform within 1 month after the defendant received the decree. If the de­cree is delivered by posting at the defendant’s premises, it will be deemed received 15 days after posting (Sec. 79 CPC).

In order to obtain the deposited money from the Court, the lawyer has to contact the plaintiff to submit a statement for taking the money. The plaintiff can receive the money by himself or authorise the lawyer to do so.

After submitting an application mentioned above, if the motion is granted, the Court officer will issue a writ appointing an executing offi­cer.  This writ will be sent to the Execution Department in Bangkok or to the Execution Office in other provinces.

After the property has been sold, the officer will deduct ex­penses and executing fees and then give the money to the lawyer or the plaintiff, as the case may be.

4. Attachment of Claims against Third Parties

In some cases the defendant may not have property to be seized, but has monies which will be subsequently received from other persons, e.g. salary or claims against third parties. The executing officer may ask the Court to detain such amount, which is to prohibit the defendant to dispose of such claims and prohibit third parties to make payment or submit property to the de­fendant but to submit it to the Court instead.

In order to attach money or property of the defendant, the lawyer has to submit a peti­tion to the executing officer stating the information of where to attach the de­fendant’s money or from whom the defendant would receive money.

It is a fact that every country has a different le­gal system and different rules dealing with the civil procedure. The enforcement of foreign court orders in principle is quite complicated and subject to certain approval procedures under Thai law. Unlike domestic court orders, for­eign court orders (e.g. a judgment of a German civil court) are not likely to be enforceable under Thai law because Thailand did not sign any bilateral agreement or reciprocal agreement with Germany. To execute against a party in Thailand, a new case has to be filed again in Thai jurisdiction. Moreover, the foreign judgment is merely treated by the Thai court as one piece of supporting document to the case. Therefore, it is advisable for the parties to enter into an arbitration agreement in order to secure the enforce­ment and execution in case of cross-border commercial disputes.

Arbitration can be defined as a voluntary agreement between the parties to submit a dispute to an impartial person (Arbitral Tribunal) to determine an equitable settlement in a judicial manner.

Arbitration can be divided into two categories, national and international arbitration. According to Chapter III of the CPC concerning national arbitration, this type of arbitration is exclusively for the case pending before a Court of First Instance where the parties can choose to submit the dispute to one or more arbitrators for settlement by filing a joint-application to the Court. If the Court is of the opinion that it is not contrary to the law, the Court shall grant the application (Sec. 210 CPC). The award given by the national arbitration is a final binding judgement. However, it is still considered a domestic court order, which is still subject to enforcement and execution limitation in foreign countries.

Outlined below are several advantages for the parties to refer their dispute to arbitra­tion rather than to commence an action in court:

Although one of the most important advantages for the parties to settle their dispute in arbitration is the international recognition of the arbitral award, it is important to note that according to the new Arbitration Act if the award was made in a foreign country, the Court having the jurisdic­tion may pass its judgement enforcing the award only when such award is subject to a Treaty, Convention, or International Agreement to which Thailand is a member, and it shall be enforceable as long as Thailand agrees to be bound by them only (Sec. 41 Para 2). At present, 149 countries have signed the 1958 United Nations “Convention on the Recognition and En­forcement of Foreign Arbitral Awards”, known as the “New York Convention”. This Con­vention facilitates the enforcement of awards in all contracting countries and Thailand became a member in 1961.

Under Section 9 of the Arbitration Act, parties can file an application to execute an arbitral award to one of the following Courts:

According to Section 42 of the Arbitration Act, to enforce an arbitral award the winning party has to submit an application to the court having jurisdic­tion within three years from the date the award is enforceable. Along with an application, the following documents shall be attached:

Although the Arbitration Act is meant to promote the recognition and the use of ar­bitration proceedings to enforce an arbitral award, the award may be rejected by the Court having jurisdiction, irrespective of the country in which it was made, if the party against whom the enforcement is invoked can prove that:

These conditions are also in accordance with the conditions set forth in the UNCITRAL Model Law on International Commercial Arbitration.

In addition, according to Section 44 the court having jurisdiction may refuse an application if the Court is of the opin­ion that an award deals with a dispute that cannot be settled by arbitration under the law, or if the enforcement under the said award would be against the peace and order or the good morals of the public.

However, Section 45 prohibits parties to appeal to the higher court against the order or judgement of the court having jurisdiction, ex­cept:

After the Court has passed the order or judgment stating that the award is enforceable, the further execution procedure shall be the same as for a civil court judgment, i.e. getting a decree, appointing an executing officer, seizure, and so on (see page: 2).

We hope that the information provided in this newsletter was helpful for you.
If you have any further questions please do not hesitate to contact us. 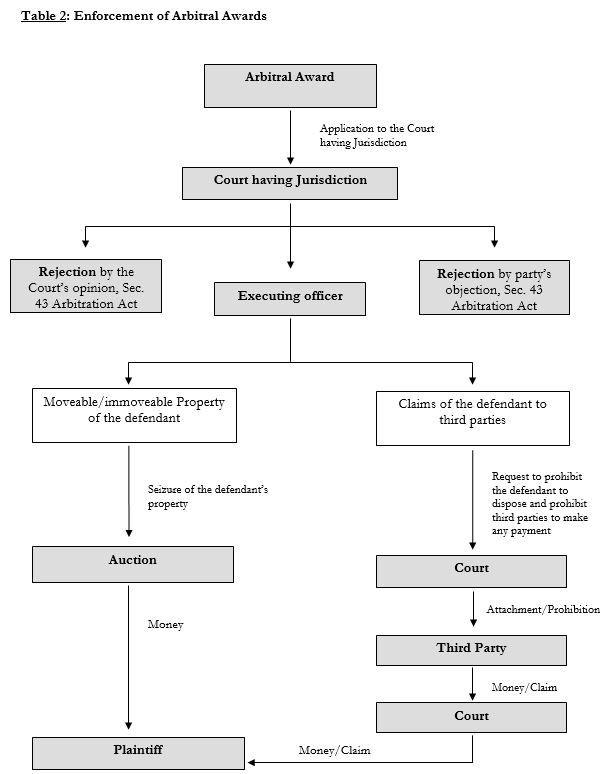